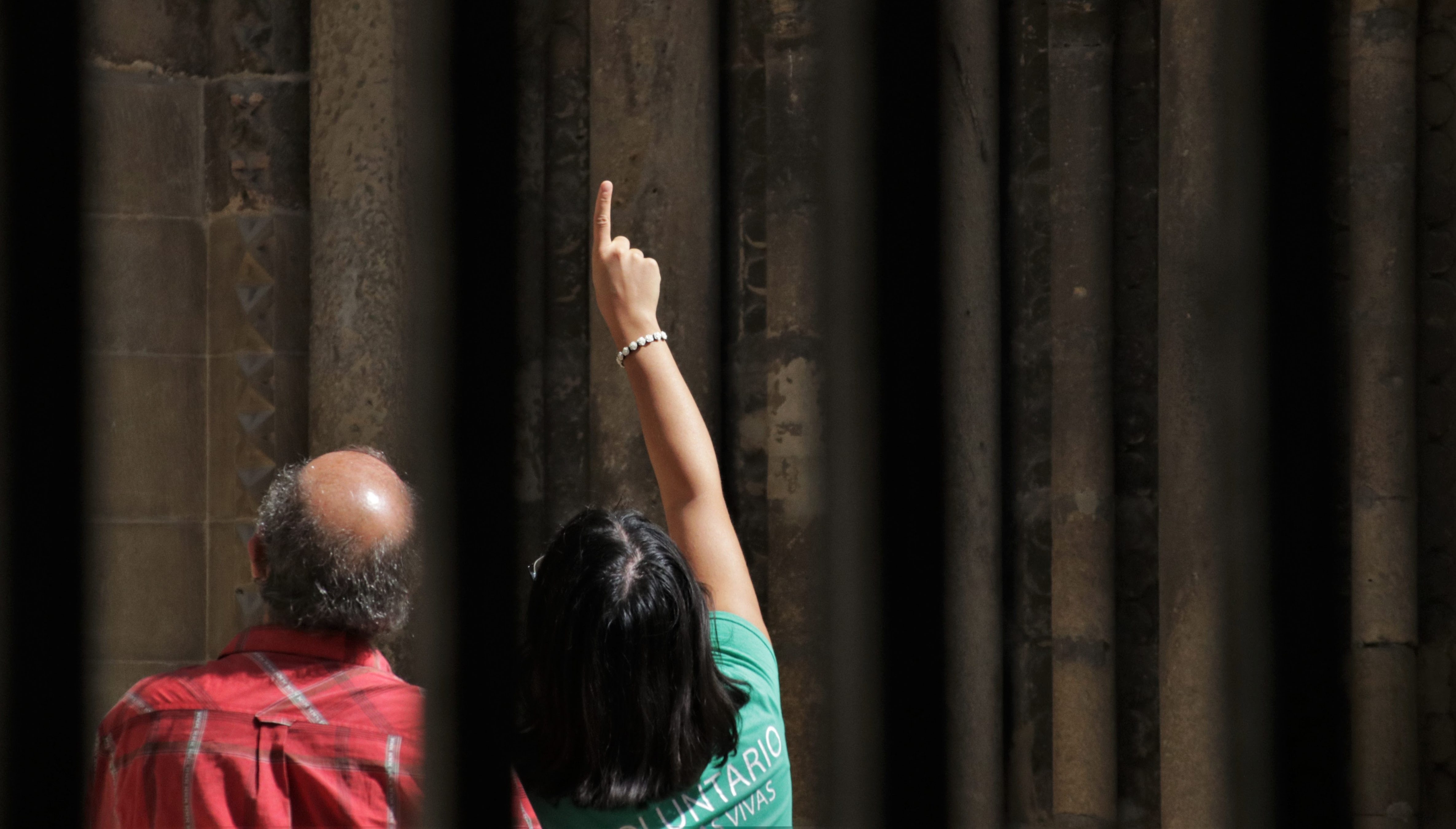 Living Stones is an international communion of Christian youth communities which aims to announce Jesus Christ – that is, the Beauty of the Church – through the beauty of sacred and religious heritage.

The Living Stones communities have a distinctive style that gives priority to prayer, intense community life, theological and art-historical formation, simplicity, service, the attention to marginalised people and complete gratuity. 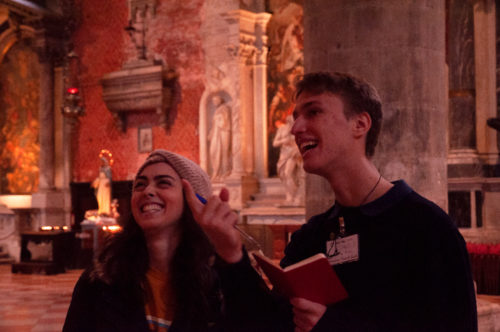 “If a pagan asks you to show him your faith, take him into church and show him the icons and explain the series of religious paintings to him.”
(St. John of Damascus)

How can we proclaim the Good news to those who are far from God? Often in recognized places of worship, where we offer a “service of the Word”, those who are far from the Gospel are absent. On the other hand in those places where we meet the far away, the Gospel is “implicit”. So where can we find nonbelievers who are ready to listen to an explicit proclamation of the Word? A surprising answer because of its simplicity is: in Church; precisely in our churches. We think that nonbelievers “cannot be reached”, but in reality they are already in the house of God and the numbers are going up. We think we are to look for them in a thousand different ways but actually they are the ones who have been looking for us for some time. Those who are “far away” came looking for us at our house and they did not find us.

In Europe and much of the Western world religion faces a strange paradox: the more society is called “secular”, the greater interest there is in the religious monuments that have been built across our land over the centuries. Visits to the monasteries, cathedrals, churches of the great Christian tradition continue to increase, and religious tourism is one of the few sectors that have not been affected by the crisis. The less frequently one goes “to Church”, the more one goes “into the churches”.

This is a profound paradox and not just a religious one. Precisely because society is a liquid and shapeless society, it “flows” to the solidity of the stones of the past which are capable of shaping it. In the “container” represented by the sacred building, contemporary man tries to find his own limits, his own identity. He is like a child in a dark in a room. He looks but he does not see. He wants to touch, to experience.

So if someone speaks God’s Word to him, the Word suddenly acts like a light. The frescoes become visible even to the heart. The mosaics reveal the beauty of life. The very shape of the building shows the “perimeter” of man, his limits, his identity. That is why John of Damascus writes: “If a heathen comes and says, ‘Show me your faith!’, you take him to church and show him the icons and explain the series of religious paintings to him”.

The Word proclaimed by a witness to someone who goes into a monument transforms the monument in “monumentum”, that is in a memorial structure or place. Memory is the backbone of identity and communion because it is the way in which man learns to look at himself as another and then to look at the other as himself. The stones of the sacred monuments of Christianity are the mediation instrument. Together with the Word they have an almost “sacramental” role. When a believer meets a nonbeliever within the walls of a Christian monument and he welcomes the nonbeliever and explains the message of the holy place to him, then the stones become what Florenskj calls: “the framework of an Encounter” when referring to the icon.

The goal of the Ignatian youth groups called Living Stones is to facilitate this encounter. They have distant roots in a brief experience of the CLC in Fribourg (Switzerland) in 1991, at Saint-Michael’s Church, where the body of St. Peter Canisius is buried. There were tourist guides in several other places throughout Europe who did pay special attention to the Christian roots of a monument: CASA in France, Ars et Fides in Venice and Florence. However Living Stones have a dual goal approach: 1. to enjoy the visit as a proclamation of faith to those who are far from God; 2. to do it as a Christian community based on prayer that invites people to pray. Thus the tourist sees for himself what the stones of the building really represent and the monument, the “artistic place” is transformed into a welcoming centre, into a listening, therapy and mystagogy centre; into a place of encounter.

In 2003, at Frankfurt Cathedral the name Lebendige Steine ​(living stones) was used for the first time to refer to the group of volunteers. Since then, part of the Living Stones “method” includes preparing a “prayer corner” in the sacred building where they sing, read passages from the Bible or experience silence. After every guided tour led by the living stones, tourists who so wish can stay longer. They often write a prayer or reflection in a notebook left open which will be read by the living stones community during their evening prayers. But the ‘”prayer corner” is first of all for the living stones themselves. After each guided tour they stop before their Lord and return to him the people entrusted to their care during the visit.

The apostolate carried out by the living stones is conceived as a true “spiritual exercise”. It comes from prayer and it leads to prayer. Before the guided tour, during recollection, the volunteer asks God: “Lord, what do you want me to say to the visitors on your behalf?”. Then, with the “grammar” he has learned during the art and history training, the living stone chooses those points that he feels can help the listener to meet God. After the tour the volunteer, entering into internal recollection again, asks God: “Lord, what did you say to me through them?”. Thus every encounter becomes an Encounter. On greeting the tourists (often at the entrance to the Church) and whilst looking at them, be them atheists or believers, be them people who came by accident or on purpose, the living stone prays: “Blessed is he who comes in the Name of the Lord”.

After a break that lasted a few years, the Living Stones “reappeared” in 2008, with a more “stable” formula. First at the Church of the Gesù in Rome, for a 15 day “international camp”; then on a more regular basis, in Bologna (Santo Stefano), birthplace of the first “living stones” youth community that would meet to pray, discern and receive formation. A similar community was then born in Rome at the Church of the Gesù and at that of St. Ignatius. The living stones of Naples were born in 2010 as the “apostolate of the CLC”, and the living stones of Bologna started their service in Ravenna in four of the churches included in UNESCO’s World Heritage List. Nowadays there are other Living Stones communities and groups in Genoa, Milan, Cagliari, Munich, Prague, Padua, Turin, La Valletta, Bratislava, Florence, Lubiana, Palermo, Modena, Santiago de Compostela, Budapest, Barcelona, Paris, Pisa, Siena, Madrid, Santiago de Chile. And soon in Taiwan, Montevideo, Luzern.

Communities are autonomous but they can be recognized by a distinctive style characterized by the priority given to prayer, the intense community life, the mystagogical accompaniment of the tourist, the simplicity of life, the attention to the poor and to children and the fact that their service is completely free. This last feature is an essential element of their style and is inspired by St. Ignatius’ desire for ministries to be performed without recompense. In fact the proclamation of faith is the proclamation of the gratuitousness of God and can only be done for free. The proclamation of faith creates an “imbalance” in the heart of the tourist which he seeks to fill.…. paying for the service. If the guide accepts payment, the tourist feels satisfied because he is reassured in his belief that gratuitousness does not exist, that nobody gives anything without asking for something in return. However, if the living stone does not accept payment this healthy imbalance persists and it will lead the tourist to an inner journey. Often rather personal questions are asked at this point: Why are you doing this? Who are you?

Each Living Stones community develops peculiar features that enrich the “Living Stones communion” as a whole. As part of their voluntary work in prisons, Padua’s Living Stones offer jail prisoners the same kind of guided tour they offer to tourists but, in this case, with the aid of a power point presentation. Genoa’s Living Stones offer visits after midnight for the young people enjoying Genoa’s nightlife. Bologna’s LS are developing a program of visits for blind people. The LS of Rome were official partners of the Taizé community during the 2012-13 New Year’s holiday meeting, with a Living Stones service in 11 churches in the city, in what has become an “international living stones camp” with more than 60 volunteers from 9 different countries. Since that time LS is partner of Taizé in each New Year’s meeting.